I still can’t believe the Patriots won last night. That’s all I’m going to say about that…

The only foodstall at Falchi’s celebrating the Super Bowl winners was Don Tapas, who served clam chowder in the Patriots’ honor. That’s cool, but I don’t like clam chowder…but their new special, the Greek Chicken bowl, sounded interesting.

Another interesting thing opened up next door to Don Tapas: Sans Bakery! This bakery has gluten-free items, some of the goods are vegan. I wanted to dip in only with my toes (at first), so I ordered a brownie bite for $1.

I’m sorry to say, but the sauce killed the dish; it was way too garlicky, sour and gloopy. Also, the chicken was too dry and well-done. At least the veggies and the rice were nice.

Dessert: Good chocolate note-ratio, though I do like brownies to be fudgier, this was very dry. I don’t know if that’s because of the flour’s absence.

All in all, not a bad way to start out another workweek. 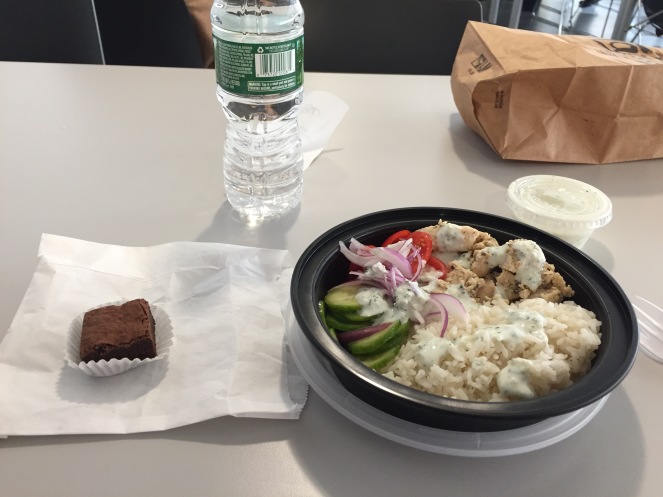